Each year, Mezipatra gives three awards. The winners of the eighth edition are: The Main Jury Award for Best Feature Film: Les Témoins, the Honourable Mention: Dolls. The Student Jury Award for best Short Film: Who's the Top?, the Honourable Mention: The Saddest Boy in the World. The Izraali film The Bubble received the Audience Award. The awarded fimmakers got unothodox prism created by leading Czech designer Zdeněk Vacek. 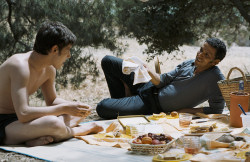 The Main Jury of the 8th Czech Gay and Lesbian Film Festival Mezipatra has decided to award Les Témoins (The Witnesses), directed by ANDRÉ TÉCHINÉ.


Set in 1984, at the outbreak of the AIDS epidemic, Les Temoins brings to a generation that did not witness it, the beginning of the plague that became a turning point in the history of the homosexual community. Les Temoins is a multi-layered story that shows, without pomp, the contrasts between illness and health, sex and romance, friendship and companionship.

The Jury values that, even while dealing with a heavy subject – a disease that has caused so much pain, disgrace and death –, the film does not succumb to sentimentalism, unnecessary drama or caricatured characterizations, either of the period, nor of the types portrayed.

The plot is not manipulative, does not take sides - offering, instead, a peek into the weaknesses and hypocrisies that are part of most people´s lives.

Unafraid of touching the subject of the most political disease of our times, writer-director Téchiné does not try to seek approval, admiration nor pity over the characters, while exposing the inadequacies and insecurities of people´s sexuality and feelings.

By shooting the first part of the story (covering the events before the tragic start of the shattering of their lives) with a light that gives us the feeling of a constant Summer, the director sets the mood, then changing it into cold colors once the second part takes over and everybody gets affected by the then little known and deadly virus.

Instead of covering just the dramatic contraction of an illness, about which prevailed widespread ignorance, fear and, eventually, prejudice, the film goes beyond the drama of a death into the cynicism imposed by everyday life and the inevitable continuation of old habits and tendencies.

Les Temoins shows without masks or excuses various parallel love stories, with all their emotional contrasts and muddy realities, while making them all unwilling witnesses to the ravages that this emergent illness will come to unleash on their hearts and lives. A heartfelt portrayal of lifting loyalties of a group of acquaintances with completely different backgrounds and ambitions, dealt with grace.

The Jury unanimously decided to give the Main Prize to Les Temoins for its beautiful cinematography, for its great acting and characterization of players, for developing a balanced rhythm and storyline which cover the times when AIDS was new, though without patronizing the issue or masking the gay community´s universe. And for its important contribution to the understanding of a key event in our history by new audiences.

The Jury decided to award Pusinky (Dolls), directed by KARIN BABINSKÁ and written by PETRA UŠELOVÁ a Honorable Mention Prize, for its outstanding qualities in style and storyline. The Jury celebrates the director of Pusinky also for being among a select group of women who succeeded in breaking the many barriers that keep a mostly male dominance in the field of filmmaking.

The film is shot in energetic and innovative ways, offering a sort of road-movie aesthetics with a female twist, with a contagious rhythm and surprising twists.

The Jury wants to highlight the talent of both the director and the screenwriter, who created a great piece of cinematography, unafraid to dare and with audacity in their approach to taboo issues surrounding lesbian and heterosexual emotions. It offered the crude and the tender with courage and style.

Pusinky offers an insight into the developing minds of a group of friends and their adolescents´ dilemmas, angst and confusions, all with the adrenalin of their adventures and decisions. It is a film with an honest approach to lesbian love and its consequences.

For all that, the Jury offers Pusinky this special award - the Honorable Mention Prize.

The jury would like to award the Prize for the Best Short Film to Who’s the Top? for its authentic and appealing topic and the topic’s elaboration. The reality of lesbian sexual orientation and relationship stands here since the beginning as an unquestioned and accepted base of the story, sorted out in a very sensitive way and with humor too, dealing with the situation, where one partner has specific sexual desires while the other rejects them as perverse. Contrasts of emocional and, on the other hand, sadomasochistic dominance in a relationship, reception of this “deviation” and crossing certain taboos in the lesbian context are highly interestingly put.

The film is capable of focusing on a clean-cut problem and also its story is so universal, that it would have worked as a pattern even if the protagonist had been two males or a heterosexual couple. The formal and dramaturgical aspect of the film keeps the polarity of a realistic portrayal of a complicated relationship, containing authentic dialogue and fitting comments of the heroine, with her inner world, which is visually and symbolically enchanting, operating as a metaphore and a next level of the movie, due to the excellent work with instruments of film language.

The jury appreciated the exceptionality of the film’s concept and its ability to put various nontraditional questions in an aesthetically extraordinary piece of art. 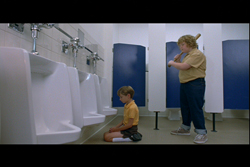 The jury decided to award its honorable mention to the movie The Saddest Boy in the World, because it extraordinarily and in a small-scale area processes the classical subject of otherness of an individual in opposition to his uncomprehending family and surroundings. Otherness, in addition, is not reduced to minor sexual orientation, which is only intimated, as it is otherness in a wider sense.

The counterpoint between the serioussnes, the tragedy of a desperate „different“ child, and its depiction in a flaming visual style with a dark sense of humour, is valuable both artistically and as a different point of view.

The jury appreciates the equilibrium of the movie on the thin border among brutality, innocence, colourful aesthetics, almost cynical comicality and impressive emotional sensibility.