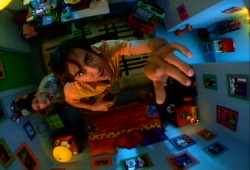 A story about censorship and circumcision is set in Ottawa in 1979. Peter Cort, a researcher, is writing a book on male circumcision. Peter Koosens, his assistant has a sexual obsession with Canadian Prime Minister Pierre Trudeau and regularly doctors photographs to depict himself and Trudeau in romantic entanglements. They later meet Peter Denham, a video artist who sets his films to Jackson Five songs. After Denham inserts photographs of Koosens and Trudeau into one of his videos, the three are arrested for copyright violation by an opera-singing police officer, put on trial in a courtroom scene set to La Habanera, and sent to a prison boot camp.