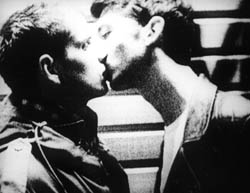 Angels – Friends – Lovers. The four short films (Seduction of Angels, The Whiz Kids, Tango Apasionado, Hotel Paradijs) by Jan Krüger observe most of the time in a surprising way - from the  distance and close by - the addiction and the rage that sometimes come up, in friendships and relationships - between, men, guys and angels.

Jan Kürger received the Silver Lion at 58th Filmfestival in Venice in the category Best Short Movie for The Whizz Kids, which was also nominated for the European and German Short Film Prize. All of these four short movies were presented successfully at international festivals, three of them for example at the Short Film Days in Oberhausen. The Whiz Kids were screened at last year’s Mezipatra.