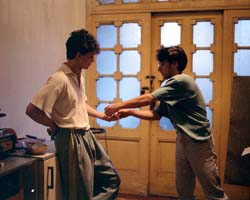 Film from the lives of college students is the first film in Czech cinematography which touches (of course discreetly, tactfully and seriously) the topic of homosexuality. This topic was a taboo during the communist era. Moreover, it was one of the first films which tried to describe the intensive atmosphere of the Velvet revolution in 1989. Zdeněk Troška he is one of the most commercial film directors of the present, focusing on comedies and children’s film, this film is one of his few attempts at handling serious issues.